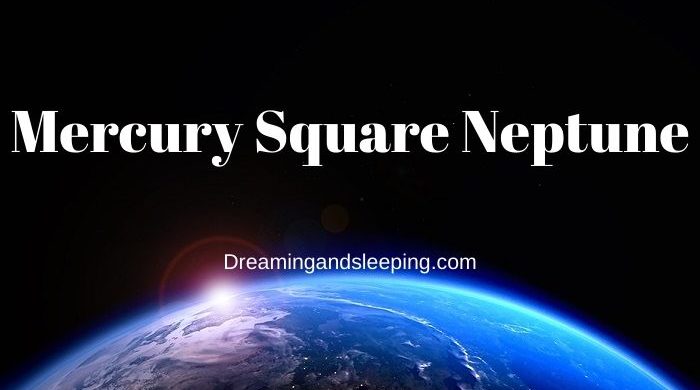 Whenever the planet Mercury appears in the natal chart (in any shape and connection), you know that the effect it has can be seen in our conscious mind and our ability to think logically and analytically.

It also marks our way of communicating words and exchanging information – everything that is connected to words and communication is its field.

Here, Mercury is found in the difficult position with the planet Neptune that comes as the opposite of everything that Mercury implies.

Unlike Mercury, the metaphor of Neptune is construction, the union of parts into a functional whole.

Instead of words, Neptune expresses feelings and thus describes a form of expression without words, through emotional bonding that allows it to identify not only bodily attitudes and non-verbal characters but also the emotional state by which one light, what that person thinks and what that person really desires to carry.

So, does this mean that these two planets have much bigger opposition since they are found in a square position, and even more, does this mean, that in the Synastry, two people cannot be in love, since they look at the same thing with the completely different view?

In this square position, we can see the real nature of the way of thinking and communicating that can vary, and we can identify where we most often make mistakes.

Right away, we will tell you that the mistake part comes when we do not know what to listen – heart or mind.

A large number of people that have this position often rely on their Mercury “part”, especially in their way of thinking and communication and there are those who emphasize the Neptune flow as they are pronounced enthusiasts and dreamers who cannot fit into the way modern civilized society, where much of it is based on pure logic. 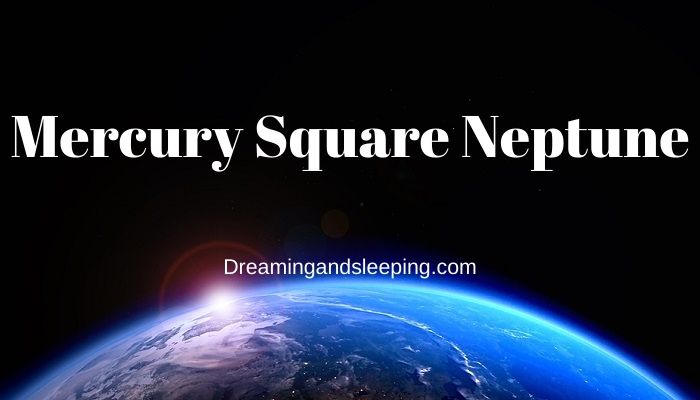 And there are those who have both of these sides in their personalities, and the fact is that the usage of these spheres combined is the way they are thinking and communicating, even if sometimes it can be really confusing for others.

In a Synastry, for example, you have one lover who is relying on a left side of the brain is logical, analytical, and rational (Mercury), and the other lover is relying on a sensory, intuitive part (Neptune).

When in astrological symbolism Mercury and Neptune interact in an angular relationship, square aspects, the two shares of our brains either cooperate with each other or are in some kind of difference, and from this come the biggest problem for the people who have this aspect.

In this case, when the aspect of squares is valid between the planets Mercury and Neptune, which are considered to be a challenging aspect, the two halves of brains are faced with challenges that they have to solve, but the problem arises because each emphasizes its own way of solving and avoiding mutual cooperation.

But, if they are able to overcome this problem, and believe us some of them are able to do such a thing, what they could become?

They will set themselves as people who succeed in everything, they are those who are able to manage their lives by using both sides, and they use one and the other whenever they need it, for example, for work they use that side that is rational, and when times are like that, and they are in love, they let the imagination and dreams to rule.

They can truly become superior in their line of work and are truly able to overrun all the opponents they meet along the way.

They can be the ones that do not have any competition, and they run their own game.

On the other side, we can see a situation, in this square position, that clearly indicates that the two vehicles (Mercury and Neptune) will collide if neither one misses the other.

And this is what happens in the case of the symbolism of a square between two planets that are so different and opposition, and the square just enhances the difficulty that is present.

To understand why the Mercury square with Neptune is a difficult and challenging aspect, because these people are torn apart between trying to connect the images around us meaningfully and based on past experience, and it does so in a straightforward, step-by-step manner.

It is like a person who wants to use logic in an emotional part of the life, and he or she fails in that part of the life; while that person attempts to use emotions in work, and those expectations do not lead him or her into the desired direction.

We are not saying that one or the other is not possible, but we are also saying that fails are mandatory in the path, and some of them are not easy to overcome.

In the case of Mercury and Neptune square, our brains are governed by the “or-or” principle, or logic or intuition and favor only one function of thought which gives us incomplete picture and information, which confuses us and causes us uncertainty and problems.

You can imagine how much trouble this causes in the love life – it is almost unbearable – in any case, it causes major confusion.

They find themselves in situations where they do not get along well with others (they cannot find something in common that will connect them and build the suitable relationship), they are confused, disoriented and scattered about thinking and decision making.

That is why we are in great danger of making the wrong decision, and often when bad decisions are made in love, there cannot be turning back, or they are unable to find happiness.

The good side of this square position is the one that if such position occurs, it is able to put everything in sight, what is happening, connects into one image, that is, the whole, and we all know that we want to be whole with that significant other.

Maybe, the worst part comes in Synastry – because the two lovers are unable to find something in common because of one “sees” with emotions and other with ratio.

Once again, all of us know that the planet Mercury is regarded as a symbol of a logical and analytical mind that is stable when is deeply rooted and when it has all other aspects that deal with it in the same way.

Then people succeed in business because they are considered to be tricky and cunning, but we are not saying this in a bad way.

Some say that this also means that persons with this position are those who are impermanent, prone to fraud and the like – and there is an aspect of this here.

When combined with the planet Neptune, then this is not an accident, but it is a very clear natural fact.

Some of the people with this aspect are not sure that their brain is telling them the truth and only the truth, because often brains give them incorrect information. Again, this does not mean that our brains are lying.

What we are trying to say that people of this aspect could find a good career in jobs where they could deliberately fabricate distorted truth for the sake of, for example, the art.

Their brains do not lie but give them only the information they need to be aware of at a given moment in order to survive and achieve the best possible results in life.

Very often they are forced to react quickly and to make important decisions in a very short time, but because of the Neptune part of their brains, they are able to gain an insight into the totality of the situation that requires lengthy data processing.

It is said that this aspect is great for writing, because they have rich thought world, imagination, but sometimes, they lack interest in the everyday world, and they explore topics that are interesting to no one but them.

People, by the impact of this aspect, become empathetic and sensitive, full of ideas and a very vivid imagination – unfortunately (or luckily), anything is possible.

Maybe the best word to describe is to say that there is no rule, not in any part of their lives. They can go for all or nothing, and they have equal chances to do so.

The interesting thing about the square position that is formatted between Mercury and Neptune stimulates the imagination, inspires, inspires, and introduces into the “invisible” fields.

All of this could have an amazing impact on our lives, but also, this is the aspect that is characterizes by big lies. This is the time when many of us will have so many meaningless ideas or ideas aimed at exploiting other people.

There is no confidence in this aspect, and many astrologers say that if in this time you need to speak, it is much better for you to stay in the silence.  And if you need to do something – it’s hardly fair.

Mercury is the leader in communications, but since Neptune is in the picture, there is a tendency for fraud very intensified.

What are good are the overwhelming attempts to prove or say something – but it is of dubious quality. So be careful not to go into the lives of individuals, there is a major possibility that people will either deceive others, or they will be the ones that will be deceived.

And Neptune dictates our dreams and holds power over our fantasies of life. The realm of this “reality” is – reluctance because Neptune is a planet of reluctance and blurring of things – to bring about a state of obscurity.

The things that are being tidied up are not what they seem to be. Neptune is a planet of deception, and now the more plausible the idea – the more we are mistaken.

So these days, when you know that this aspect is “alive”, don’t believe in a blind idea, try to doubt everything that is happening around you and looking “beyond”.

This is also the time when you can expect a good dose of mental confusion, and it is advisable that you do not believe everything you hear. Be a little skeptical – especially when it comes to big commitments, they can be the worse.