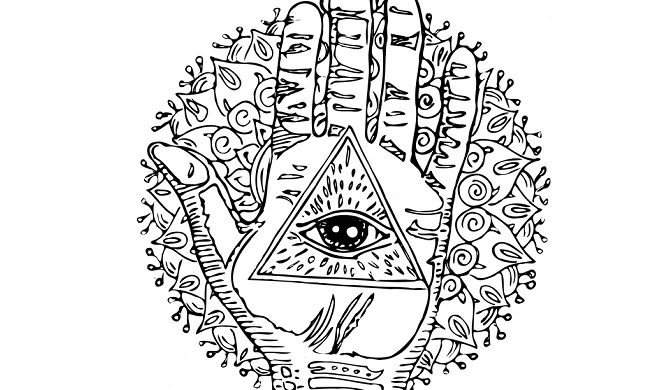 Hand as a part of the human body was and still is considered one of the most important parts of us, we are not counting the heart, our soul, and the brain; but we are also using our hands on a daily basis, and they also have their symbolical meaning.

This was also true in the past, in many religions and spiritual teachings – the Hand became the symbol in its own writings and among them, the most important is the Hams Hand. Hamsa is present in various Oriental doctrines, such as Judaism, in Islam and Buddhism, with its own specifications according to each religion.

In Buddhism, for example, the Hamsa Hand is used to guard against fear.

Currently, the Hamsa symbol is present all over the world, whether in prints of clothing, pendants or tattoos. You do not have to belong any religion to know and love the Hamsa Hand, and above all, to believe in its powers, that are countless.

Read all about this wonderful and ancient symbol that is present in our world for centuries, but it has never lost its “magic”.

This symbol is connected to the mostly Arabic world, and its origin when translated means “five” in the literal translation, which refers to the five fingers of a human hand.

Other names that the Hamsa Hand is known are the “Hand of God,” “Chasm,” “Fatima’s Hand,” or “Hamish’s Hand,”

The Hamsa hand is considered an amulet against evil eyes for followers of Judaism and Islam, mostly, but it is also recognized in other religions, or in another spiritual teaching around the world.

Also, we would like to speak of the symbol itself – the “Hamsa’s Hand” is characterized by the drawing of the symmetrical right Hand (fingers of the same range) and around or other symbols in the middle of the palm, such as the stars of David, fish or pigeons. It is firmly believed that all of these symbols are able, combined, to reinforce the idea of ​​protecting Hamsa’s Hand, which can have numerous representations. 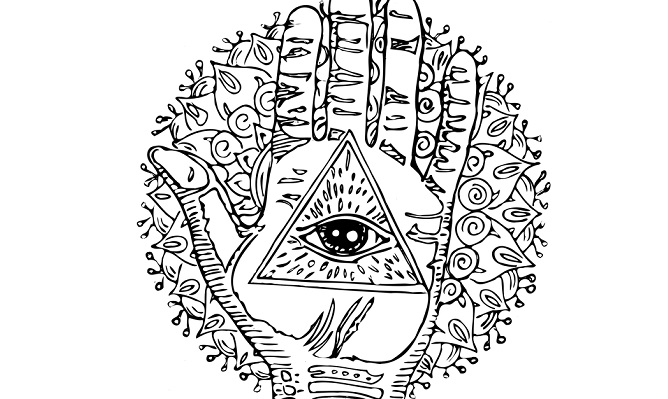 To name a few, when fingers in Hamsa Hand are presented together, the amulet serves to bring good luck; if your fingers are separated, this means that it should be used to repel negative energies, according to popular tradition.

Nowadays, in modern times, people do not wear amulets and talismans in some traditional way, but they are putting them on their bodies and in this sense, the tattoo is a perfect choice. For all those who want to carry this magical Hand on their bodies, and be protected at all times, the Hamsa Hand tattoo is the logical choice.

People who choose to tattoo the “Hamsa Hand” usually seek the symbolic meaning of the amulet, plus its aesthetic beauty that is undeniable, and looks amazing when seen on the body, in the form of a tattoo.

Among other interpretations attributed to the “Hamsa Hand” is the power of fertility and the protection against fear – it is given to children, just to protect them from evil forces that are all around us. In this sense, it is always connected to the mother, to sister, that care and sacrifice that only a woman could give.

The Meaning of Hamsa Hand

As far as the meaning goes, when it comes to the Hamsa Hand, we must speak of the Hand itself that is one part of our bodies that could bring us closer to the God, we put our Hand in the air, and we could almost touch the sky.

Additionally, the fact that we have five fingers, or that Hamsa Hand also has five fingers, just shows that it is the magical number. Such idea originates from Mesopotamia, where it was dedicated to the Assyrian-Babylonian goddesses Ishtar and Inane, and there it was a sign of protection that is related to the woman power.

In this sense, we must speak of other religions that also respect the Hams Hand, but it is undeniable its impact on Islam. There the Hamsa Hand is called Fatima’s Hand – based on Muhammad’s daughter Fatima Zahra, while in Judaism, it is Miriam’s Hand, and in Christianity, Mary’s Hand – according to Jesus’ mother.

As you can see, this symbol is recognized all around the world, in all religions.

It is believed that Hamsa, or Miriam, or Mary is pure, completely sinless, and they consider her Hand a symbol of protection, power and strength. At the same time, the five fingers on her Hand represent the five pillars of Islam: faith, prayer, humanity, fasting, and the journey to Mecca, as the spiritual journey that every believer should take in life.

Hamsa Hand became the part of Judaism when it was brought by Spanish Jews, who had the opportunity to see this symbol on the Alhambra, the most famous Islamic fortress in southern Spain in the 14th century.

In Judaism, this Hand, as the symbol, signifies the five books of the Torah, and in modern days this Hand is most associated with Kabbalah, but it is also used in some rituals and can be found in all Hebrew stores.

In Christianity, and also Judaism, the Hamsa Hand is called Miriam’s Hand, after Moses’ sister. For 40 years, it is believed that Hand was leading the people of Israel to the water through the wilderness they roamed to the Promised Land.

So, wherever you look, there is one woman Hand that was powerful, connected to the numerous stories, and myths, but undeniably it was the representation of the protection, strength, and fear, and it belongs to the woman. It had all traits that we found in any mother in this world -care, sacrifice, strength, endurance, etc.

The Symbolism of Hamsa Hand

As you may know, and we have mentioned this sometimes in this piece, for all people around the world, since the ancient times, the Hand was and still is the undeniable symbol of strength and power.

If we look back in ancient Egypt, the concept of the Hand represented the greatest power that governs both heaven and earth.

In some books that are connected to the religious and spiritual matters it could be seen that the Hand was the one that holds the chain securely bounded around our world so that we are all protected from the underworld (where everything bad, ugly and scary resides).

Recall that the palm of the human fist has always been considered a strong energy field, and that the lines are cut on the palm in direct connection with the brain – that is why it is often on Hamsa hand that various symbols (and often the name of the talisman owner) can be found in the hope that his the fate of being under constant divine protection.

In some parts of the world, particularly in the Islamic tradition, this symbol is usually placed on the protective scarf with the information of the person who will wear it as protection, power; energy, love and positivity are channeled into it.

For the purpose of a better understanding of this amazing symbol, we will compare it to one symbol that is also present in the world, and truth to be told, these two have numerous similarities, at first glance. We are talking about the Hamsa hand and the Evil (Turkish) Eye, and the very interpretation of these symbols is well intertwined and complementary.

Although the phenomenon of “famous eye” is deeply rooted in the tradition of many people, Hamsa Hand is nevertheless a more sophisticated symbol that, in addition to all of the above, can also show sociability, concern for other people, compassion and humanity.

In this context, the “Eye” is more present for the protection, but the Hamsa Hand offers something more, it offers the depth of emotion, compassion and care, and therefore it is much stronger symbol then the “Eye”.

To sum up, its symbolical value, we will say, after all, that we know regarding the Hamsa hand, that it could be great protection for all those who have some problem in life, or who have found them on the crossroad and do not know what to do. It will offer the right solution, and bring about happy circumstances that will help you to cope with all adversity that may come to your way.

It is a good and positive sign, and you do not have to connect it to any religion, in particular, it can be the symbol that is above all of them, respectively.

It is believed that if you “wear” the Hamsa Hand, such thing will bring you so much happiness, health and success; and above all the most important thing, it is the amulet that will give you the necessary protection from all evil that is in this world.

It is the amulet that destroys the influence of a spell, drives evil, protects in dangerous situations, and brings happiness and prosperity to those who carry it.

Additionally, we must speak of every finger that belongs to the Hamsa Hand – every one of them is connected to the one part of you, in energy sense; but it also shows its connection to nature, the elements that we find in it.

We believe everyone is well aware of the image of an open fist emerging from a cloud with indispensable rays of light – there is no one who did not see this image, even if you are not aware of what does it mean: The Mary’s Hand, the Hand of Miriam, while for Muslims it is called Fatima’s Hand, or it is well known for its most popular name Hamsa Hand.

The very name of Hamsa comes from the Arabic word that when it is translated. It means five (as in number 5) or five fingers of the Hand.

Its origin cannot be proven with certainty, but it appears in various cultures and has been used as a shield against negative energy and evil, and in addition has the power to bring peace, pleasure, joy and joy into our lives, and is equally useful for maintaining health and increasing fertility.

The undeniable fact is that the Hams hand with outstretched fingers was a powerful symbol in ancient Babylon, where it signified the highest power that governs both earth and sky.

Later we also find her as an indispensable detail in many medieval paintings where she was used as a symbol of the Highest Force, the one that rules us all, and the Hand is our way to come closer to it.

And even today when you look at the people that belong to many different cultures and religions around the world the Hamsa hand has managed to retain the title of the most beloved symbol of happiness and protection against the evil force, whatever that may be for us.

We could all agree that there is no better symbol of “catching on to happiness” than a divine hand that is spread out and ready to help and in the most dangerous situations; and when you know that that Hand belongs to the woman who is ready to sacrifice for you (a sister, mother, etc.) then you can be sure that you could use it as a shield from negative energy and evil.

The Hamsa hand has the power to bring peace, contentment, joy and laughter into our lives, and is equally useful for maintaining health and increasing fertility.

In some interpretations, the Hamsa Hand and its five fingers are the representation of the five elements that are part of our nature, along with the five energy fields in our bodies.

In these contexts, we could say that these connections represent the unbreakable connection of the Hand and the general health of a human.