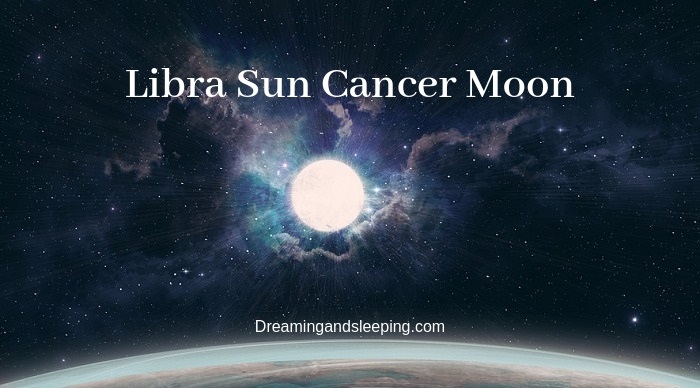 We understand why so many people do not believe in the horoscope, and for so many of us, this is outrageous – how is possible that the planets in the time of our birth can show our personality and future events even?

But the experience teaches us differently, and some of it we can explain it easily since these phenomena do not fall under the observable phenomena, some of them are considered “real”, yet remaining at the core incomprehensible.

But even if something is not observable in some conventional way, or strictly scientifically provable, that does not mean that it is not authentic. So, some things you learn by the experience.

In these articles, we deal with the impact that comes from the Sun and Moon that is located in this particular case, in the signs Libra and Cancer.

This is the person who has the strength of the spiritual balance that the Sun in the Libra brings, and also his life has a certain stability thanks to the changing spirit of Cancer sign (the Moons location in this case).

This is the person who is shaped in a way that he is capable of perceiving the feelings that he has, and he looks for the best way to express them.

He has that love for beauty, and it can be expressed and that it can influence its loved ones by creating an intimate fund and benevolent sweetness that radiates the finally found balance.

This human being is tactful and peaceful, and he is able to speak his mind, he has that sense of justice and the development of relationships with other people. To really get something done, this human needs a partnership, this kind of support will help him to achieve whatever he needs to be done.

He is an analyst, in the times when he needs to look at both sides of the problem and make the best decision – unlike so many Libras; this is able to make some decisions.

He constantly measures “for” and “against”, effectively and loyally; therefore he acts indecisively, but all that for balancing things in his life mentally and emotionally.

In everything, this person sees what is positive and what is negative, and here he can make a decision and take a balanced stand.

He can even work so hard to resists temptation in the face of illusion, and when his narcissism is upset by a sudden desire to show elegance, he feels difficult to put himself in a relationship with others, to define varieties of his own character.

Sometimes, he may even struggle with the dilemma of what he will show and he will focus his energy on his appearance, rather on his intellect or knowledge.

Even if he would gladly drop the mask behind which hides his excessive sensitivity, but this does not allow him a fear of showing how vulnerable he is -and here we come to the main problem. This is the person, who has Moon located in the Cancer sign, and therefore he is the one that is overly sensitive, and the Sun in the Libra wants this to hide, so he is in the division.

As you were able to see in the previous sections, this is a person who has the well-known Cancer sensitivity, and it is even more pronounced in certain years of his life.

His attitude in love is mostly connected to his sensitivity and close connection to his loved ones; it is very hard for him to leave or to be in conflict with the people that he loves, even if he often confronts them.

In other words, it will be very hard for this person to leave his family, to get his own independence, and find that comfort and happiness outside the primary family. This attitude makes this person hesitate more than he would normally do when the times comes for him to choose his lovers.

Above all, a human being with the Sun and Moon located in the Libra and Cancer combination loves a harmonious atmosphere in his love life, in some sense; he is incapable of living alone and has to be constantly confident before others. We spoke about this in the previous sections where we said that this person needs a partner to achieve his full intentions.

Others see this human, in their internal communication as the one that is elegant and sophisticated, charming and subtly sensible, the one that has the finest taste and natural beauty – he loves to be circled by beautiful things and beauty in general, and often times he chooses such lovers that have beauty inside and outside. He has impeccable flavor when it comes to picking his lovers, and he has a standard to maintain and will rarely abandon such ideas.

In love, and when in a loving relationship – he is a romantic, an idealist, and often times he is the victim of his sensitivity. Because such features he can be a victim in relations with his lovers, who at some point will start to jeopardise his own self-confidence, so he must be careful.

A person who has Sun and Moon located in the Libra and Cancer signs has the strong intuition that when he should make a choice in love – when he chooses right he feels, he loves, spreads positive energy, but always turns to his intimate world, which he does not give up very well.

His lovers must be aware at all times, that this human being is very penetrating and insightful, but also very sociable – so do not expect from him to stop seeing his friends if he is a relationship, or to give up his independence. Also, if he succeeds to overcome his over sensuality, he can be a lover that knows what is going on, and his lovers should never attempt to fool him.

When in love, this person is very proud of his lovers and always stays sensitive to the suggestions, the fines, which means more to him than some big thing – you can “bought” him with some small things.

In a more negative note, this person could agree with the diverse types of lovers and his greatest wish is to create a beautiful and peaceful world of love.

The perfect lover for this being is born in Leo Zodiac sign – even if this relationship can have problems since both of them are passionate – the love connection between candidate that has Sun and Moon located in the Libra and Cancer signs and Leo lover can be complicated but is always passionate and fun, and the problem arises because of jealousy on both sides.

The Sun in the Libra will help this connection to work, because of its tendency to balance things and natural ability of diplomacy.

You already know that this is the friend who has so much to offer to his society, but the one worrying thing here is that for this person it is very hard to tolerate the aggressiveness of his friends and their need to argue, he likes to make diplomatic solutions, but he can speak up for himself, when needed.

When he chooses his friends, he does not pick average people – his friends must be more like him, the one that feels and understands (the Moon in Cancer).

At times, this person can be torn between its contradictions (reason and emotions) so that he becomes strange, sometimes overly to the people who want to be his friends. Great sensibility will impose an obligation on him to protect himself from all who want to harm him, and he will sometimes suffer from the bad intentions that come from his so-called friends.

In the end, if you want to be his friend, you must accept that he is one romantic, irreverent dreamer, who believes that this world is so civilized and that there is no need for any aggression and conflict; so for this reason, this human being knit a network of trusted friends who create security for him.

Divided between love for family intimacy, sensual comfort and sentimental stability, and love for social contacts, a person who has Sun and Moon located in the Libra – Cancer combination has one great goal in life.

That goal is the one where he will create a society or profession simultaneously and preserve a tranquil world of relaxation and dreaming. Such an ideal balance is difficult, but he believes that he can reach it since he believes that he is endowed with this rich and controversial nature that can do everything.

The problem in his life occurs at the moment when he finds that it is very hard to calm the need for a strong inner life and the desire to open up to the world. Will is not his stronger side, and frequent indecisiveness leads to it failing in the goals it determines.

But, we must say, at the end of this piece that many astrologers think that this is one of the best luminary combinations of the Libra sing (where Moon is located in the Cancer sign) and in his life the search for the family home and the love and the desire for emotional balance are combined.

He has exceptional charm and peacefulness inside of his character, a strong need for a family home, connected to his roots, tradition and strong ties with the people that he loves deeply.