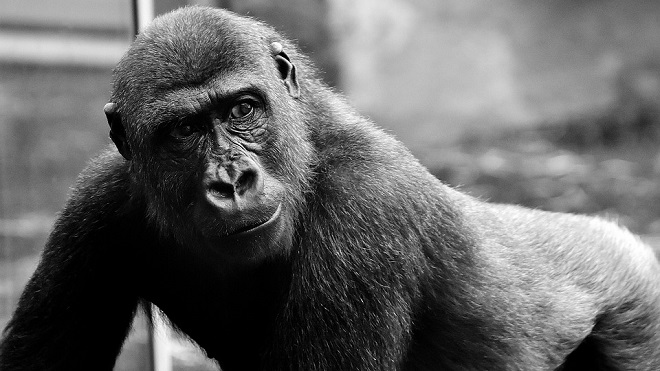 Gorillas are large mammals that live in warmer parts of our planet. They have been always interesting to people because of their resemblance to us. Their habits, the way they behave and relate to each other has been intriguing to people for centuries.

Many cultures around the world worshiped this animal and considered it to be sacred and divine. In many countries this animal is still considered to be divine and they continue to give this animal special place among all other animals.

Gorillas are usually harmless animals, but they have an aggressive side to them. They are extremely territorial and protective when it comes to their young ones and habitat.

In popular culture their image remained the same as it was hundreds of years ago, except the attention is now more on their biological and importance rather than their spiritual.

Strong – Gorillas are extremely strong their bodies were built for protection of themselves and others in their group. Gorillas can grow up to two meters and weight over hundred kilograms. Their appearance is very much intimidating and not many people would gather up strength and come near them.

Social – Gorillas live in groups and they never separate from others. This is their way of life and they cannot survive without each other. Taking care of others is in their nature and we will later see how this trait is mirrored in the gorilla symbolism.

Intelligent – Gorillas resemble people in many different ways. Their behavior and way of life is striking because we can see a lot of the same patterns in the way we behave. Gorillas live in groups and require socializing just like we do. They are able to evaluate situations more clearly than other animals and protect themselves from predators by using their cleverness.

Gorilla as a totem

Gorilla as a totem is very powerful. People born under this totem or the ones protected by it are very social. They live to socialize with others and share ideas and thoughts. Life in groups is something natural to them and they wouldn’t know any other way. 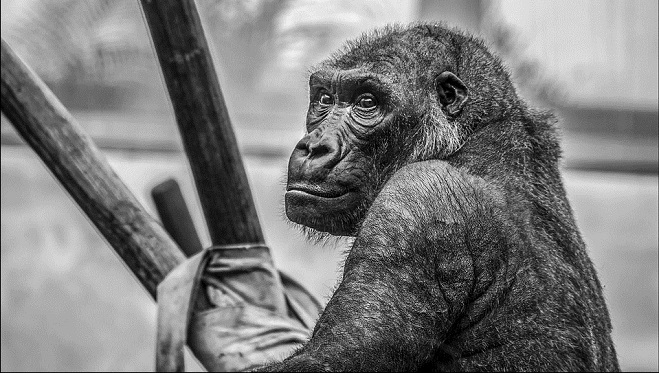 These people choose careers that require team work and shared experiences in order to achieve great goals. Working alone or spending too much time away from other people is something they cannot stand.

This applies to their love life as well. They hate being alone and not having that special someone to be with. They enjoy partnership and everything it entails because this is the only way they can find sense in this world.

People born under the gorilla totem or protected by it are also very selfless. They are kind and loving people who will give everything they have for someone they love. Cherishing a relationship with someone is more important than doing things only for themselves, and this kind of behavior is often strange to others.

It is hard to believe that someone puts other people on the first place and neglects its own feelings and desires.

If you are protected by this totem, then you are driven by compassion. Seeing someone in trouble or in desperate need of your help breaks your heart. You immediately react and you will certainly do everything in your power to help this person get back on its feet.

This is why people born under this totem are natural doctors, nurses, fire fighters and social workers. Every person in the world is equal and values equally to them and they will never neglect someone’s cry for help.

People born under this totem are gracious in life. They accept defeat and victory in the same manner and nothing can make them fall into despair. They can often seem like cold people to others, because they do not show anger or extreme joy about things. Being gracious like they are doesn’t let them act irrationally.

They look at a situation with an open mind and pick themselves up every time they end up on the ground.

Overall, people born under this totem are kind and loving people who approach others with honesty. They never expect anything in return for their good deeds and they certainly don’t do anything I order to gain something back.

Gorilla as a symbol in a dream

Dreams about gorillas can have different meanings. This depends on other symbols that were in the dream. If you had a dream about a gorilla in general then this dream represents an ominous sign. You will probably get ill or someone close to you could get ill. Be careful and take good care of your health in the upcoming period.

If you had a dream about feeding a gorilla then this dream is a warning sign about people around you. They might try to cause you problems or make you pay for something you are not guilty of. Don’t share information about yourself and stay as private as much as you can.

Dream about a dead gorilla is a representation of your enemies or rivals. They are set up to get you and finally get you of your throne, so be careful and do not trust anyone.

If a gorilla in your dream was attacking you then this dream represents love. It might seem strange but you are about to meet someone who will become your special someone. Make sure you stay social and approach people with an open mind before you discard them from your life.

Dreams about several gorillas surrounding you, are a representation of troubles that are secretly pressuring you. You feel like there is no way out of these problems and you don’t know what to do to make things go back to normal.

Gorilla as a symbol in different cultures

Gorillas have been used as symbols for centuries. People admired these animals and rarely feared them. Somehow they always seemed like our friends and there is simply a natural connection between people and primates.

Gorillas take on a special place in cultures of many nations. In China monkeys and gorillas are considered to be sacred animals. There are temples and shrines dedicated only to gorillas and monkeys. These mammals were used as motives in Chinese literature and art, and they saw monkeys and gorillas to be tricksters. They are cunning and always up to something.

Besides being tricksters, apes are also brave and adventure loving creatures. Many Chinese heroes and ancient creatures resemble apes. There is simply a special connection between people of Asia and apes that cannot be described. They saw monkeys and other apes as supernatural creatures that often shape shift into humans.

In Africa, gorillas are symbols of family and protection. Since they always live in groups it is no wonder that people eventually realized these animals are family oriented. In African culture, gorillas are considered to be lucky animals that bring positivity and peace into our lives. In other African tribes, gorillas are symbols for peace and quiet thinking, that increase our chances of fortune.

In popular culture, gorillas are one of the most often used symbols. From logos to movies and video games, gorillas are present in all cultural aspects.

Another memorable character, that is probably the most recognizable one, is the King Kong gorilla from the movie King Kong”. In this movie, gorillas are represented exactly the way they are. From outside they seem like beasts whose only goal is to kill or harm people, but once we dig deeper into their souls we realize they have the heart of old.

In literature and popular magazines, gorillas have been and still are popular motives. They appear as beloved characters in books like Harry Potter, Ishmael by Daniel Quinn and many more.

Art has changed its form over the years and people enjoy sharing their love for certain symbols with others. This is why gorilla tattoos have been popular for decades. They symbolize communication, socializing, family, nurturing and dignity.

Such a strong symbolism is hard to find in any other animal. This is what makes gorillas so special and universally loved by all of the people around the world. They are harsh and unapproachable at first, but once we get closer to them we will find that these intelligent and loving creatures are not so different from us.