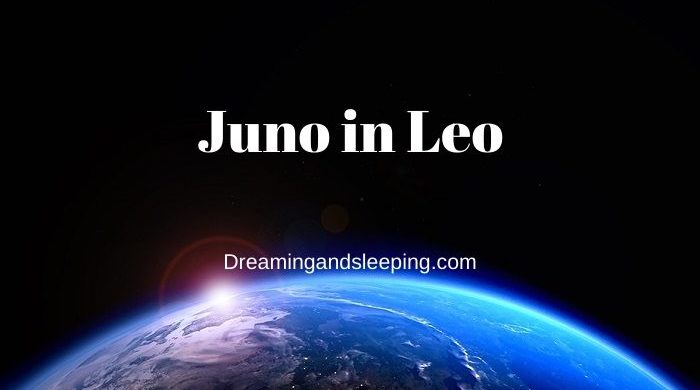 Juno, or in Greek mythology, Hera was Zeus’ wife, though she is also his sister in mythology, but that matters less.

Hera was very jealous, so much of Greek mythology detailed her anger and conspiracy in relation to Zeus’s actions and posterity, but Hera or Juno never divorced.

She needs to be a woman, not anyone, not a wife who would not be valued, but quite the opposite – a woman who is alongside the most powerful

She wants to be seen, loves to marry because that is her primary goal, and so even in marriage she is the most important partner and everything revolves around her in her life.

Hera is biased, always with her husband and motherhood can be an option but only as an integral part of a quality partnership.

Juno or Hera are very keen on marriage and will have a hard time getting a divorce because there are children and other things she loves, and status is the most important of all.

It is always Juno’s fate to have a strong partner and how large that part of a woman will be in someone’s life is viewed precisely through the position of this asteroid in relation to the natal horoscope. Juno in horoscope gives us a good indication of what kind of spouse we need and what kind we will get.

Venus and Mars show us what we think will be our ideal partner. 5th house describes the type of people we engage in romances with, 7th house says what type of person our first spouse will be, 9th house what kind of second marriage it will be….. 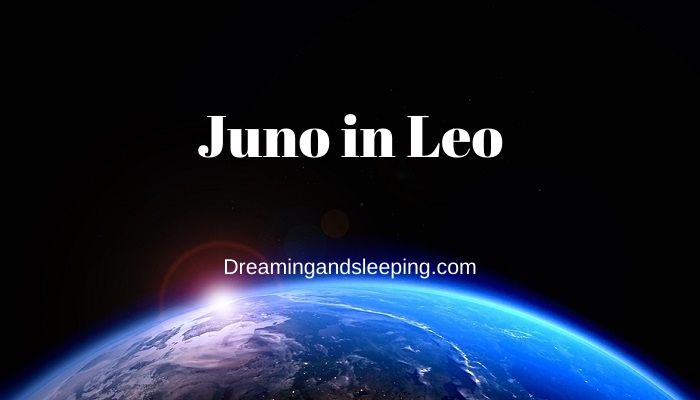 Juno in Lion wants romance and excitement. He wants a partner to be proud of and to admire. They don’t like to feel neglected or rejected.

They can become very selfish or use inappropriate ways to get attention.

They love it when things are equal for everyone. They are natural entertainers and want to be the center of attention. People with Juno in Leo are very appreciative and respectful of their friends.

On the downside, they can become arrogant or immature and quite commanding.

They can also be very generous and loving. They are determined and never change their minds.

You have very high standards when it comes to choosing a spouse, because you will only be satisfied if you happen to be someone who is successful, accomplished, important and possibly known.

This position signifies that your partner is a very strong personality, ambitious and capable, active in many fields: in business, sports, love, fun, going out. Your relationship will be dynamic and exciting, followed by romantic and even theatrical surprises, as well as dramatic, intense and passionate periods.

A partner will always strive to make you happy with expensive gifts, interesting trips and go-to places. To be happy, your partner needs to be creative and fun, someone who gives you the feeling that you deserve royal treatment.

You will have someone who is generous and protective, but in spite of this, you may occasionally have some sense of incoherence. When the family expands and the children come, then the atmosphere changes a little and brings difficulties (not immediately) in the marriage.

In this case, children can become the cause of conflict between parents. If Juno is poorly placed and stressed, problems can arise because of his partner’s pride, self-focus, authoritarianism or vanity, so he can be arrogant, repetitive and selfish.

It’s a dramatic position for Juno in that you like marriages all over the place, the idea of sealing a commitment is a matter of honor and the ritual is extremely important to you, so you won’t skimp on celebrations.

But it also provides an affectionate and protective attitude towards the family and the spouse, they are people who take care of their own like lions and choose couples who represent them socially speaking, people who “shine” in some way.

Nobility and wisdom adorn more types of this zodiac sign. Cowardice and cries for life are completely alien to these lovers of elegance and height.

Refinement is also necessarily reflected in the environment in which they live. The high standard of living naturally goes with the Lions.

When it comes to the lower types, that height necessarily translates into unnecessary pomp and unavoidable kitsch, and in this sense they act as inventors of kitsch and false luster. Lions have an inherent authority that they spontaneously impose on their surroundings.

They are great and often good advisors, but the problem is that they share tips even when no one is looking for them. They act as teachers who have mastered all of life’s lessons flawlessly and expect you to be grateful to them for the piece of universal knowledge they give you.

They like to be in the spotlight and find it difficult to contradict. They do not tolerate opposition and often see it as an attack on their honor, so in that sense we can say that they are unnecessarily vain.

Of course, the throne is always reserved for them. They see the world as the stage where the main role is assigned to them. The rest are usually loyal audiences who are expected to applaud the main characters of the drama.

Always occupied with various businesses, they quickly forget the past. They should not be challenged, especially their authority should not be exercised, because the Lions are inconvenient enemies. They almost act invulnerable.

In addition, the famous lion’s “roar” is known, a roar that simply paralyzes anyone who finds the Lions an obstacle on the way to the realization of their ideals.

When it comes to business, we must emphasize that the Lions are exceptional enthusiasts and great devotees.

From the analysis of their psychological structure to assume that they are far better directors than workers. A born leader, a visionary, the Lion does not like to execute someone else’s orders even though he firmly believes that he can do his best.

A good financial position for him is a prerequisite for any other happiness, though he is not overly frugal. Money is used to show him power and status. He tolerates insanity more severely than any other zodiac sign.

Juno in Leo is looking for a famous and important man for her husband. This is how Juno is placed in the natal charts of women who marry kings and rulers, such as Eva Peron and Dear Machine.

These women need to be noticed and therefore it is very important for them to find partners who will attract the attention of the public and their marriage.

These Juno are eternal romantics, so love in itself is never implied, but their partner is expected to continue to marry them just as they did before marriage.

The fulfillment of marriage in these persons is also enhanced by the expression of their talents and creativity, and a very important service in the life of this Hera will be enjoyed by her children, who are the source of her joy and pride.

However, when it comes to her children, as well as her husband, they will always be expected to reach high standards of living as well as social recognition. Everything in their married life must be in grand style.

Her family’s name and social status are what this person strives for in life. The most important focus of this Hera is her love, children and creativity. Underestimated or neglected, this person will call attention to eccentric, inappropriate and scandalous behavior.

On Juno in Leo the marital relationship (or otherwise, equivalent in some way) can be paid ground for the development of creativity and love. The forms of the relationship can be covered, both with a bright, romantic and even theatrical touch, as dramatic, intense and highly combustible.

The discussions arise about issues of pride, self-esteem, self-centeredness, authoritarianism, vanity, and so on. And, as in the case of Juno in Cancer, the children of people with Juno in Leo can become subjects or objects of confrontation between parents.

When children arrive it is when, in general, crises (not immediate) in the relationship can occur.

Juno in Leo grants a royal feeling of dignity to the native and he expects this recognition from the couple, while the native with Juno in this sign must behave accordingly.

The person with this position gives and demands total attention from the spouse and if he does not obtain it, it can cause great scenes.

Juno is the asteroid that has to do with the legal and ritual aspect of marriage, that contract that unites us with another person and makes us a “family”.

The sign and the house where you have that asteroid on your map, talk about your expectations regarding marriage and the type of union you aspire to, of course that assigns certain characteristics to the ideal partner, and becomes a parameter to discard suitors.

But, here is what I think you are most interested in, Juno is also present on the map of your potential partner and according to that he or she will also use his native Juno to discern whether or not you are the best choice.

A very interesting fact is that Juno appears as a prominent star on the map of famous people who have obtained positions of power through marriage. Think of Meghan Markle for example or Jackie Kennedy –

I do not say that it is a marriage by “interest” but with public or important people in some way and that entails a significant leap of status for the person. The example I gave is of women but it can also be the opposite.

It is not a matter of deep intuition of water-horoscopic signs that unconsciously “reads” the foundations of the world in which it exalts, without a clear need to act in it, but of the intuitiveness of the Lion related to the action to be taken, for realization, determination in the world.

That is why the acts of life of Leo are above all honest. Dignity, openness and vitality certainly go along with this “Royal Nature” which is difficult to influence.

The typical Lion is not intolerant, but rarely falls under someone else’s influence. It goes without saying that he knows everything best.

If the position of the Sun is compromised, it becomes a dictator and a sadist, aggressively disproving another’s will, decisions and even life itself.