Hummingbirds are breathtaking birds that inhabit South and North America, Caribbean Islands and Central America. These amazing creatures are well-known for their ability to fly extremely fast and rotate their wings quicker than any other bird.

Hummingbirds feed of on insects, so they live in places that have an abundance of them. They mostly live in rain forests but it is not unusual to find them in your backyard or in your garden.

Hummingbirds move their wings several hundred times quicker than other birds which allows them to hover over flowers in search for food. They also feed of on frit nectar, inside flowers, and their long beaks help them reach places that are unreachable for other birds.

Hummingbird is not only a beautiful creature in real life, because for centuries, people have been using hummingbirds as symbols and as their spiritual animals. So, what does a hummingbird symbolize? We will tell you more about hummingbirds in this article and explain to you the spiritual hummingbird meaning.

Learning about animal’s characteristics and traits is crucial for understanding the meaning behind certain symbols and symbolic meanings.

Playfulness – Hummingbirds are very playful. You will find them often in your backyard, poking on your flowers in the garden and flying around carelessly. Their flight, by itself, is already a great representation of their playfulness and character.

Fast – It is needless to say that hummingbirds are fast. They can rotate and move their wings faster than any other bird on the planet, which allows them to escape trouble in case someone is after them. This trait is very important for these fragile birds, because, neither their size or strength can help them with predators.

Beauty – There are a lot of beautiful animals in the world, but we can all agree that hummingbirds are somewhat special. No creature on Earth is more interesting and colorful than a hummingbird. Their feather come in different shapes and colors and this is why people have used their image as a symbol for centuries.

Carelessness – This trait is a little bit unusual, but when you look at a humming bird flying around, it doesn’t look like it is flying around with a certain purpose. They mostly fly around air carelessly and enjoying their view from above. 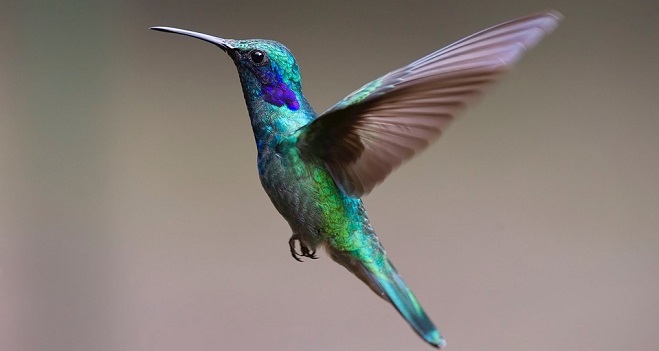 Resilient – Their outside appearance can fool people, and make them think that hummingbirds are fragile and weak. This, however, is not the case. Hummingbirds need to cross over or fly over many miles to find a perfect habitat during winter time. They can’t live in the cold and snowy nature, so just like many other bird species, hummingbirds set of on an adventure to find warmer places to survive winter. This means that hummingbirds need to fly for a long period of time and go back after the winter has passed. In order to do so, hummingbirds need to be very resilient and very strong so that they can make the trip.

Useful – This is an unusual way to describe an animal, but hummingbirds are just that. They use their long beaks to dive deep into the flower to grab the sweet nectar out of it. Hummingbirds do this for survival and for food, but with doing this they are actually helping with pollinating and birth of new life.

Hummingbird as a totem

Hummingbirds have been used as totems for centuries. Their beautiful appearance and amazing flight has interested people for a long time. They have been portrayed as magical and even fairy-like creatures.

So, what do hummingbirds represent? How can their appearance and traits be reflected on people? Hummingbirds are a symbol of lightness of being. They float around air with such light movements that our eyes can barely capture this stunning flight.

Hummingbirds are a representation of relaxed and easy life. They always remind us to look to the brighter side of life and not to let our troubles and problems get to us. With their beautiful colorful feathers, they resemble something out of a storybook and fairytale, making our lives more joyful day by day.

Hummingbirds also represent being present. They capture the pure essence of life and being alive and conscious in every moment in your life. Hummingbird tattoo meaning usually portrays this premise in life, that you should always be present and use every second of your life, because you won’t get another chance.

Hummingbirds represent playfulness in life. Not taking life too serious all the time, is actually a good thing. Stress of everyday life and problems that keep on piling up shouldn’t stop you from living your dream. At the end of the day, life is what you make of it.  Hummingbirds are both graceful and playful in their flight, capturing a pure essence of carefree being.

With gorgeous feathers on its body, hummingbird brings color to our life and makes it more interesting. It is enough to see a hummingbird somewhere and you will already feel better. These butterfly-like birds, brighten our day with just being what they truly are.

People born under this totem or with this spiritual animal are exactly like that. They love people, love socializing and love being in the center of attention. This shouldn’t be taken as a bad or egoistic characteristic, because they simply grab attention wherever they go and bring joy to people’s lives with their kind approach.

Hummingbirds can be used as symbols of positive energy. They scare away the negativity in our lives and make our lives much brighter and joyful. They are also a symbol of beauty and elegance. Their stunning appearance and gracefulness keep us interested in them. Their fragile size and weight makes them even more beautiful. Such small and gentle creatures, are still carriers of important and meaningful symbolism, and that is what makes hummingbirds so special.

Hummingbirds also represent freedom and independence of any kind. They usually live alone and fly alone, so it is no wonder that this is one of their main characteristics. Hummingbird as a sign of independence and freedom, teaches us how to be more secure of ourselves and how to trust our actions more.

There is great power in being independent and able to go through life without leaning on someone or expecting someone’s help.

They are also very fast. This is probably something, we all know about hummingbirds. They fly away in a second leaving us wanting to see more of their beauty. People with this totem are very fast in making decisions but also very impatient and not able to stand around and do nothing when they have a problem in their lives.

Hummingbirds travel great distances during winter. Even though they look fragile and graceful, hummingbirds are resilient when they need to be. To go to a warmer place during cold winters, hummingbirds fly over hundreds of miles in search for a suitable habitat.

People born under this totem are fragile and gentle at first, but they can surely take on a big problem or a big obstacle and overcome it, to everybody’s surprise. This might be their secret weapon that they use only when everyone has already given up on them.

As a totem and a spiritual anima hummingbird reminds us that life is too short to waste it on small and mundane things. You should enjoy life to the fullest and cherish every day like it is your last. They also represent small ideas and small dreams that can seem unimportant to other people, but that actually have great potential and power to even change the world.

Hummingbird symbol in a dream

Hummingbird as a symbol in a dream is a positive one. Hummingbirds represent freedom and independence. You feel secure about your current actions and you know that they will bring something good to you.

There is a lot of positive energy in your life, currently, if you had a dream about a hummingbird. You should definitely use this energy wisely to make your plans realize in the best possible way. Hummingbirds as symbols in a dream bring joy to your life.

Perhaps, something nice is going to happen to you in the following period and you will be extremely satisfied with how the things have turned out.

Hummingbirds are also carriers of life. They spread seeds around forests and trees and help new ones to grow. With their long beaks, hummingbirds pollinate the forests and fields, which is why they are often taken as a symbol of new life and birth.

They also represent how small ideas that sometimes seem not important and little can make a big difference. This can be a good motivation for you, to start realizing certain projects you have forgotten about, but that were very important to you.

Dream about a hummingbird drinking nectar out of a flower, might be a warning sign for you to start enjoying life a little bit more and stop worrying about small things.

Another interesting symbolism of a hummingbird in a dream is that it represents your inability to commit in a relationship. You love being free and independent, so any kind of commitment and boundaries make you feel uncomfortable.

Hummingbirds are usually symbols of independence and freedom, so it is not unusual to have a dream about a hummingbird when you are in a relationship that is closing in on you and making you feel unease.

Hummingbird has been used as a symbol for centuries. Ancient artifacts and drawings testify of its popularity and worshiping, that date back to the very beginning of human societies.

The Aztec people in the Central Mexico used hummingbirds as symbols in their drawings and even as a part of ceremonial rituals. Hummingbirds represented soul-carriers. They were messengers between Aztecs and their ancestors.

Birds overall had an important role in ancient ceremonies, and we can often see them around deities on drawings. Hummingbirds were sacred soul-carriers for the Aztec people and they carried messages from people to deities and ancestors.

They were especially important during hard times, droughts or floods, when tribes seek help from their ancestors.

In other cultures, in Central America, hummingbirds were a sign of love. They represented some sort of a Cupid and they would bring love to the person who spots it. Since hummingbirds weren’t that easy to spot, this made their sighting ever more magical and unusual.

Native American tribe called Hopi, portrayed hummingbirds as heroes. They represented a bond between this world and the divine one. In the ancient myths and stories of this tribe, hummingbrids asked the gods to spare humans from starvation and to send plants to the Earth.

When you think about it, hummingbirds are responsible for pollinating the Earth by sucking out nectar from flowers and spreading it further one.

In the southwest, American tribes portrayed hummingbirds as carriers of life as well. The Navajo tribe in Southwest America, knew the power and importance of this small bird even then. They understood the cycle of life and hummingbirds were equal to them as rains.

The tribe would hold ceremonial dances and rituals to summon hummingbirds and to honor their life-giving ability.

In modern society, hummingbirds are just as magnificent and important to humans as they were before. Now days we mostly honor hummingbirds by using their image on our bodies by drawing tattoos. These tattoos represent love, joy, friendliness and positive energy.