Blackbird is also called Eurasian blackbird. Its natural habitat is in Europe and some parts of Asia, Africa and New Zealand. They are best known for their black feathers, but some of them have redwings too, and an appearance that resembles the one of a raven.

They are middle sized birds with a beautiful singing voice. Blackbird’s voice has often been a big part of literary works of many famous writers and poets.

Blackbirds were not only used as symbols in songs and poems, but they also have a big importance for all those who believe in symbolic meanings of animals.

We will tell you more about this magnificent bird and its symbolic meaning, so that you can better understand its importance.

Mysterious – This trait is not very much linked to the biological nature of a blackbird, but its mere appearance makes you think that this bird has something special.

Dark black feathers and bright yellow peak, give it a stunning appearance, and make you understand why is this particular animal been so interesting to poets and artists of all kinds.

Nocturnal – Blackbirds are awake at night. This is the perfect time to escape predators and to gather food. This was one more reason to link blackbirds to something mystical and dark.

With their dark feathers and beautiful voice, they awake something in all of us that makes us a little bit unease.

Intelligent – Many bird species amaze scientist and biologists with their behavior and abilities. Blackbirds are on that list. They have their special calls or songs, and special ways of behaving in the nature. This is why they have been interesting to people, not only for their beauty, but for their brains as well. 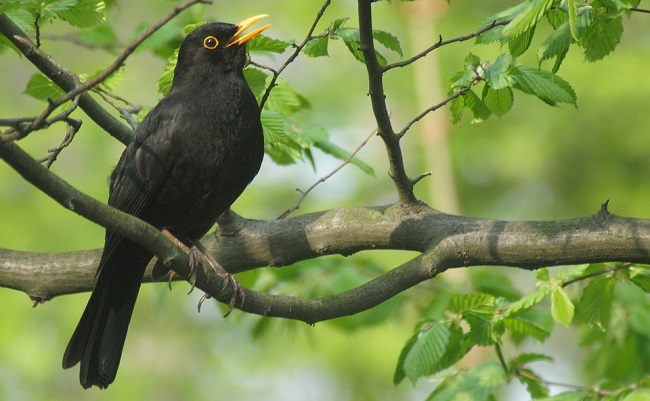 Blackbird as a totem

As a totem blackbird has an extraordinary meaning. Blackbirds represent knowledge. They are carriers of intelligence and quick wit, so everybody born under this totem or everyone with a blackbird as a spiritual animal, has a big possibility of being extremely smart and intelligent.

Blackbirds are also magical. There is simply something about them that makes people feel different. Their black outside, scared people for centuries, and blackbirds were often related to something dark and not from this world.

Blackbirds also represent intuition. People with this totem rely greatly on their guts and they won’t act, if they feel something is not right. Intuition is very important in our lives, and some of us have a larger sense of intuition and some smaller.

Blackbirds are also serious. They carry some sort of seriousness in them and authority that is not easy to poses, and that usually comes with old age. Somehow they always seem older than they really are, and other will definitely find good advice in people born under this totem.

People born under this totem are very understanding. Being intuitive, they understand other people and they know that sometimes their reactions are not mean or done in purpose, but they are simply caused by problems and struggles every one of us is facing. They also understand life and existence far better than other people.

They represent thinkers and philosophers of our time, that gift us the best works of art, poetry and scientific research. They are a great gift to humanity in general, because their minds think outside the box, and give us vision on things we didn’t understand before.

Blackbirds are also thoughtful. They cherish friendships and family members. They will always give attention to their problems and take good care of people around them. They always remember your birthday and they will never make you feel bad.

They are not judgmental, and they will never rush to accuse someone of something without a good reason. Every problem can be solved with a conversation and no problem is bigger than being a good person.

Sometimes people under this totem can have psychic abilities. They often feel and sense things other people can’t, and their talent can easily go to waste if they don’t take it seriously enough. Another way to use this ability is to awaken creativity and productivity in other people.

Overall, blackbird is a very powerful totem. It brings a certain kind of depth and power to the individual protected by this totem, and special sensitivity and abilities that are not easily found.

Great intelligence combined with kindness of the heart, makes this individual a perfect friend, companion and a family member in your life.

Blackbird symbol in a dream

Blackbird inside a dream can represent a lot of different things. To see a blackbird in your dream, means you feel a lack of motivation and energy to get your projects finished in time.

You might not be motivated by it or simply you feel pushed into doing something you don’t want to do.

Blackbird in a dream can also represent a temptation or lust. So be careful with your actions and thoughts, because they might not end up too good for you.

If the blackbird crossed your path in a dream, then this means you are about to find great wisdom and knowledge that you have been missing.

Perhaps you have been looking for a way to solve a problem in your life, and now you will finally have a chance to do so.

In Greek culture, we can often see images and drawings of blackbirds. They represent a common symbol in Greek folklore.

In England, in the Christmas Carol: Twelve days of Christmas, the line that mentions four calling birds is actually a reference to blackbirds.

Many poets and writers used a symbol of a blackbird as something evil and malicious. In the play The Duchess of Malfi, blackbirds were a symbol of bad luck and evil. They also represented danger and possibility of something bad that could happen.

Blackbird is the national bird of Sweden. The biggest population of these birds is found exactly there, with almost 2 million pairs. Their postage stamp also has an image of a blackbird and in other European and Asian countries, we can also find images of blackbirds printed on postage stamps and other important, government markings.

Another interesting fact is that Serbian name for Kosovo, was also given based on the name of a blackbird. The work “kos” in Serbian means blackbird.

Influence on literature, history and culture, of this magnificent bird, has been tremendous. We can find images of blackbirds, as symbols, dating back from ancient artifacts to the modern times.

They have always been and always will be a symbol of power, mystery and magic that will never go away.