Bats are interesting creatures. They inhabit almost all parts of our planet and their looks are something that sets them apart from other animals. They spend most of their time in dark places, hiding from the light, which makes them more interesting to people.

They have always been mysterious creatures and people were always interested in them. When we look at a bat up close, we can see that their exterior is definitely frightening, and because of this people often linked bats to something dark and negative.

If you ever wondered, what does a bat symbolize, we will share more information about this magnificent animal and the mysterious meaning behind it.

Good hearing – Bats have an extremely good hearing. This is one of their abilities on which they depend on to survive. They are blind and the only way they can protect themselves from danger is by using their ears.

Strength – Even though it doesn’t seem that way, bats are very strong. They use their claws to attach themselves to rocks in order to hang from them. Imagine using only your legs to hang on from something, and you will realize how big of an effort this is.

Sensitivity – Bats are extremely sensitive creatures. They experience the outside world through their skin and their hearing. Since they can’t see (most of them) they need to make up for this lack by being extra sensitive to changes in the air and on surfaces around them. Even though this seems like this won’t be enough to protect them from predators, in the end it turns out to be extremely sufficient.

Bat as a totem

Learning more about physical traits of an animal, helps us understand the symbolism behind them and what influenced people to see certain animal in a certain way.

Bat totem is definitely a powerful one. Bats represent mysterious side of our character, that doesn’t always shine through. People born under this totem are quick to come up with new ideas. They are usually entrepreneurs or businessman who made a fortune with their creative ideas. 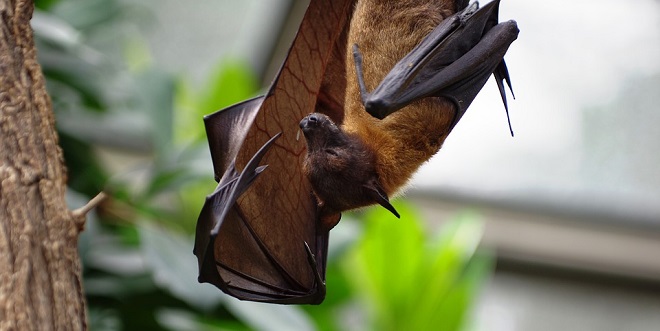 They are capable to figure out a solution to any problem in life without getting stressed or worried. People born under this totem are also able to see more than other people. They are very intuitive and can predict certain situations.

This helps them get out of trouble and also eliminate any possible threats in life. They are able to see through other people and their intentions. This helps them protect themselves from negativity and avoid being used or hurt by others.

People born under this totem are people who have had major changes and problems in life. They probably suffered great losses and they know how it feels to be alone and suffering.

The bat spirit is not afraid of darkness and it will get you through every hard situation in life. being able to face problems and misery won’t be difficult for you so you can fully rely on the guidance of your spiritual totem.

Bat totem gives people the ability to see the world from another angle. This helps them realize how things change and become, differently than other people. Having this ability can be a great advantage in life, especially if you use the right way.

You are also a very sensitive person. Your emotions and feelings are much deeper and more meaningful than in other people. This makes you a great friend and partner in life, because your friends and family will always have someone to rely on.

People born under this totem can often have abilities that others don’t. They are able to sense messages from other worlds and sometimes even communicate with them. It is not unusual that were often used in dark ceremonies and in witchcraft, because their mysterious and dark symbolism was always strong.

Listen to the signs around you and be in touch with yourself, because you might just be able to look onto the other side and experience things others can’t. this is why a bat totem is something that has a certain power and mystery around it.

Bat as a symbol in a dream

Bats in dreams can have different meanings that mostly depend on the situation you were dreaming about and other symbols that appeared in your dream.

If you see a flying bat in your dream, then this represents darkness and fear. It might represent a dark side of you or your biggest fear that has been triggered by recent events.

You probably have some difficulties in your everyday life and they are preventing you from living normally and pleasantly. You feel alone and abandoned by everyone and you don’t know how to get back on your feet. The best thing you can do is to turn to your friends and family for support. Every problem in life has a solution you just have to find a way to realize it.

You should also be careful about your health in the next period of your life. bats can often be signs of bad luck or negativity that might come into our life very soon. Avoid sharing your personal life with people who might take advantage of it and also take care of your health.

Bats can be signals that are warning us about our inner condition and the state of our health. Start living healthier and avoid getting yourself in risk, by living the way you shouldn’t.

Bat as a symbol in different cultures

There was always a dark aura surrounding bats. Spending their lives, hiding away i caves and dark places, always made people scared of them and many stories and myths came from those feelings people had towards bats.

They were considered to be associated with the dark magic and many cultures agreed on this vision of bats.

In ancient Greece, mythology painted bats as mysterious, dark and devilish. They were considered to be demons, who were in constant contact with the other side, particularly hell. They associated bats with the Hades, God of the Underworld, and bats were its messengers and loyal servants on Earth.

In ancient myths, Gods would threaten people by saying they will be turned into bats and spend their lives in dark caves and cold places. This happened to three daughters of Minyas, the ruler of city Orchomenus. Young women were transferred into bats for disobeying their God’s wishes.

In Native American culture, bat was a sign of guidance through the darkness. They used bats in rituals and ceremonies and even made cures from bats, that were supposed to lead people into the other world and help them realize their existence.

The bat cures helped them get released from themselves and opened doors to something new and exciting. The bat energy helped them see things that weren’t there and hear things that can’t be heard by everyone. Tribe people highly appreciated this animal and gave it a powerful and important position in their culture.

As a Celtic symbol, bat is associated with the underworld and spiritual navigation. They were considered to be mediums between the “other world” and our world, and their way as nocturnal animals represent a desire to be reborn.

The Mayans highly appreciated bats. Bats were, again, a link between this world and the land of hell and death. To them, the bat symbolized death, fear, sacrifice and violence. Many sculptures and images of bats were excavated throughout years, and Mayans treated this animal as one of the Gods. It represented the dark side of deities, but still it had an important position in the Mayan culture.

In medieval times, bats were something linked to witchcraft and witches in general. They supposedly used bat wings and other parts of their body to create potions and witchcraft in order to harm others. Many people were burned and killed, as witches, simply because bats were found near their homes or even because they were flying over their roofs, which only adds to the image of how important this animal was during medieval times.

In popular culture, bat symbols are extremely present. From movies to books and TV, bats are still something that is connected to the dark side or the night. Batman, a popular fictional character from movies and comic books, has become a world-wide symbol for bats.

We all recognize this sign and just like the real animal, Batman is a nocturnal creature that lives only under disguise and in the dark.

Another popular association with bats is vampires. Blood-sucking creatures that feed of blood of humans and kill them in order to survive, are fictional creatures that were always present in cultures all around the world.

In popular Bram Stoker’s novel, Dracula, the vampires transform into bats and just like bats, they can’t stand the sunlight and hunt only at night. Stories like this were not only a part of modern culture, they were always present, and nations around the world had similar stories that somehow always got linked to bats.

Overall, these amazing and mysterious creatures are still considered to be something linked to darkness and mystery.