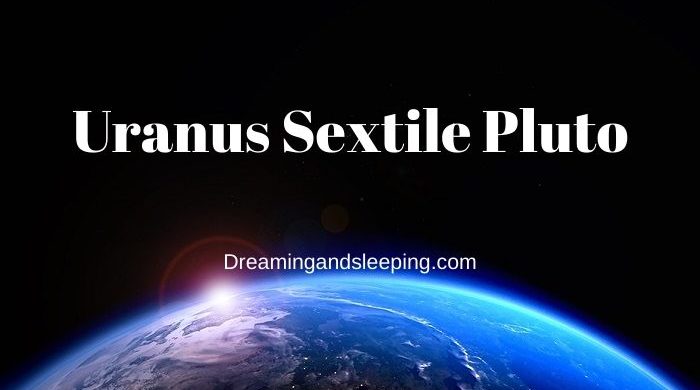 Basically, some aspects, like some planets, are considered good and some others bad. But, every aspect should be interpreted by looking at the whole natal chart, not separately.

However, it is still accepted that some aspects are lighter, the energy in them is more flowing (trigon and sextile), and some others are heavier, tougher and cause some anxiety and discomfort (opposition and square).

You should, look at the sextile between Uranus and Pluto though this view, and see it in the best light possible – but in reality, this does not have to be the case, opportunities do not have to be used.

The fact that Pluto here is connected to the Uranus means that in this sextile many interesting things happen – for example, did you know that the planet Uranus accelerate everything they touch (in this case, we are talking about the changes that are going on, but in some way they are even faster and more sudden.

Looking at things from some other perspective, this sextile brings even broken, abrupt, violent action, so the people who have this position in natal are not for everyone, they love and want lightning changes, and not everyone could deal with them.

This sextile is the aspect that causes excitement — a violation of a rule or tradition. The old is dying, the new is radiating, and everything that leads to the future.

But also an introduction to instability. The question of survival arises, and it is up to other aspects of this natal will it succeed.

In a general way, if we want to describe this aspect between the planters Pluto and Uranus, we will say that cause an intense tension that deeply affects people who have it.

These people are interested in fresh ideas in psychology and parapsychology, and in so many ways, they are the representation of the revolutionary spirit. 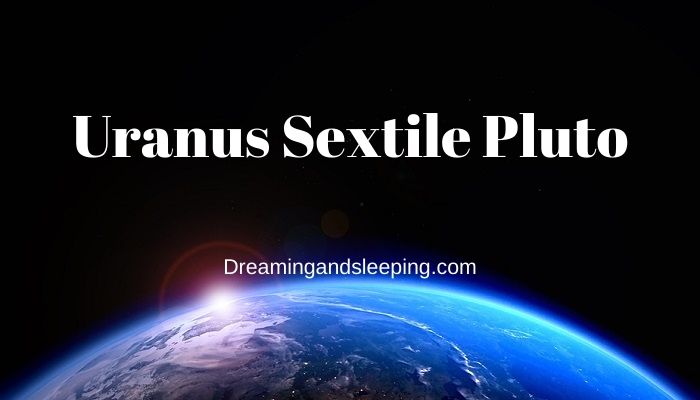 They have the desire and opportunity in life to completely transform and individuation; many of their lives are adorned with breakthroughs and discoveries in hidden and suppressed issues.

Many of them have a great potential for research work, and all of this is allowed with their relentless pursuit, dealing with issues unrelated to the everyday world, a reluctance to dictate authority.

How is this possible? Because they have a strong Pluto that wants from them to take matters into their own hands and Uranus shape them in their own way.

Full determination to build their own life in your own way and develop individuality. In every way and at all costs, these people want to grow into what they think is right, not someone else.

If we want to speak more about the positive aspects of this sextile, we will start by saying that people who have it in their natal are considered to be very imaginative human beings who can change everything for others that are present just to follow their lead.

The most pronounced part of their persona is the fact that they are used to, and they loved doing things in their own way, so the aspect of freedom is the most important value in their lives.

These people are always looking for ways to display their one of a kind personality; and for some these people look like weirdoes who are different just for beings different, and that there is no “idea” behind everything they do, but this is not true.

They are born this way, and you will only gain if you follow their organic and innovative approaches, even if they are creating disagreement in the society they live in or work in.

Maybe they are not understood easily, and this is not their intention, but for sure they are human beings who have a lot to offer to this world, and the main problem is when they are ahead of their time, so they receive recognition long after they have gone from this world.

From a negative point of view, we must say that these people have a willpower force that makes them able to transform attitudes and situations. This sounds great, right?

And it truly is, but you must bear in mind that this also implies some of the most drastic methods, so they can lead to crime – often times this sextile has this diverse side that takes them to some events that are not suitable for their personal growth, and often they will be the ones that suffer because of such life choices.

If they make some of these choices, they will see themselves “old and standing” in one place; in the way must be eliminated because there is no further progress.

Some of them may even justify their choices by saying that forces beyond our power are responsible for such occurrences.

But this is not true, their intolerance along with the destruction leads them to such places, and what is even worse is the fact that their leadership power and force that they have does not take them anywhere good but to the fatalism.

First of all, all those who want to be in any way connected to these people must be aware that they have to admire them, to show them this affection openly, but above all, them must respect their need (that they will never give up for anyone, even for a lover) to be independent and free, by all costs.

The strongest ability these people have is their strong brain, they are usually very smart, and others are drawn to them because they are in general positive and enthusiastic people. They look like those who will change something and make amazing results in the time that is coming.

These are the people who have sextile Uranus – Pluto, and this means that they are attracted to powerful morals concerning individual liberty and fairness – they want to see it in the world, but they want to with someone who will follow them.

What are even more important, people who have such sextile in their charts are living their lives by following some ideals that are outlined when, and they expect from their lovers and environment to respect it.

But, they are very charismatic when they become enthusiastic about a situation – often they meet their lovers in some interesting places, where both sides are seen fighting for a common cause.

For sure, aspects like modernization and development are significant to humanity, but their personal development and increase are also extremely valuable – if we want to tell that these people have made it in life, we must say that they had a lot of individual increase.

The most important thing is to find a way to adjust business with personal life, and that nothing can be perfect, soy the perfect must not be the goal.

When we are looking what these people are doing for work, what is their profession we will tell you that their profession is their life, and the main idea is to make a difference in this world, at the sextile between Uranus and Pluto allows such life?

These people are strongly encouraged to guide by model and make the world a more reliable community – it does not matter if their community is big or small; it is their place they want to change.

How they do their job is by listening to their inner voice, and if they are able to listen to those voices, they can truly make a world a better place – either by creating some form of art or by doing some humanitarian work.

Their amazing creative spirit and their unique knowledge make them very interesting for many people who get the chance to meet them in whatever scenario. An occupation that uses these forces is the most suitable for them, but it might require dedication, so one part of their lives must suffer.

The best usage of their talents is seen when they are able to learn more about their fate and according to it to make their work decisions. They easily accommodate used current approaches to up-to-date requirements, and this is the place where they can make some money, or become successful in whatever they do.

The negativity of this story is seen in there, for some, unconventional and seldom originally not convenitate – modifications do increase stake because they set themselves as initiators. They drive the limits of what is allowed and stimulate people’s creativity.

They are subconsciously connected to the time and place they live, but they offer some future models that would be “in” after many years. Those who want to invest should ask them where, because they never make mistakes.

We must add one more aspect here, where we are speaking of work matters – those who have this sextile are often interested in matters of mortality and fame, and therefore they want to know as much as they can about the denomination, holiness and esoteric topics.

Oftentimes they are very arty, or they are involved in culture, human law, human rights, and fairness among all living creatures.

They will fight with everything that is jeopardizing freedom, and they work the best when they have an idea to change the world.

This position is very interesting to look since the sextile between the planets Uranus and Pluto delivers important penetrations that manage intense and interesting developments in time.

In fact, looking from this point of view, in a general sense, this sextile speaks of an individual transmutation in which you encounter something at a more profound, more significant stage.

They have unprecedented possibilities that point to more prominent individual leadership and control over people, that could be used in one or other way, but it is always very strong and moving.

Above all, these are the people who want to experience complete liberty to pursue fortune and future and manifest authentic being.

If we look at sextile Uranus-Pluto from a general perspective, you should always bear in mind that this is the right time and place to examine diverse ways of helping and growing through learning methods, and including the most modern discoveries in the world today.

It is not hard to guess that this is the aspect that pushes people to develop a powerful artistic touch that can guide to modern and distinguished achievements of science, musicology or composition of any kind, it is all about the question how you use the opportunities that this sextile gives you (always bear in mind, that sextile is the aspect that shows what your opportunities in life could be).

This is the aspect that allows new people to come into your life, probably, someone who you have never seen before, and never thought that you would associate with that person.

In the deepest way, this is the aspect in natal that is connected to reforming society, you can look for the changes that will not just change your life, but lives of others, and transform population and community in global.

This transition provides the capacity to predict forthcoming inclinations – people who have it in their natal are efficient and important in fields like liberties, civil law, governments.