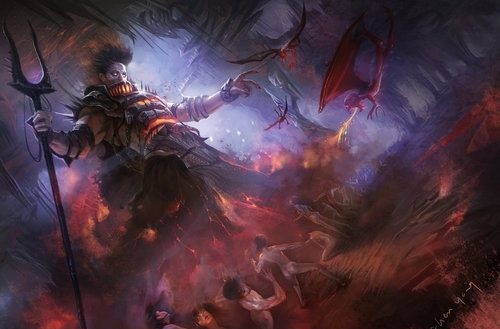 Greek mythology represents a combination of different stories and myths that were created over the course of history. Sometimes these stories represent real events that took place in ancient Greece and countries surrounding it, but other times they are simply a product of human imagination.

Greek mythology belongs to one of the oldest and best known mythologies of the world.

Many works of art from different branches tell the stories about Greek deities and allow us to see the amount of respect the ancient Greeks had for their gods.

In today’s text we will be talking about Tartarus, the Greek god who belongs to one of the more known characters of Greek mythology. So, if you ever wanted to find out more about this Greek god, here is a perfect opportunity to do so.

Tartarus to Greeks wasn’t only a deity, this was also a place where people’s souls went after they die. Tartarus was the abyss without end that took people’s souls and carried them away from Earth.

This is why people both feared Tartarus and were interested to find out what lies behind the light on Earth. To Greeks, Tartarus as a place was something similar to purgatory in Christianity. Souls would come and face judgment for everything they have done and after that they received punishment. Tartarus was a primordial power or character from Greek mythology and belongs to one of the oldest known deities in Greek mythology.

Tartarus represented the underworld and place where darkness prevails. There is no light in the underworld and people’s souls can’t escape the judgment they have to face. Tartarus belongs to one of the first deities ever born, after the creation of Cosmos. Some of the early works of Greek writers indicate that Tartarus was the third deity ever created in Cosmos, right after the birth of Gaia and Chaos.

There aren’t many proofs about the origin of Tartarus, but according to some sources, Tartarus was the child of Aether and Gaia. Many myths talk about the position or place where Tartarus rules, and explain it as the place so far away, that a bronze avil would have to fall from heaven for nine days to get to Earth and nine more days to reach the Tartarus.

Other stories indicate that Tartarus wasn’t an empty place, since there were some inhabitants who lived there permanently.

Tartarus was the place where many banished inhabitants of Earth would go to after they were banished by gods. Some stories mention Cyclopes and Titans as some of the inhabitants that were trapped in Tartarus for only a short period of time until Zeus released them. Greek God of light Apollo was also trapped in Tartarus for a short period of time. Zeus threw the large monster called Typhon into the Tartarus after defeating it.

According to most myths, Tartarus was the place where all the ones who disobeyed gods or who died, would go to. This was in one sense of the word hell or heaven, depending on how well you behaved in life.

One myth tells the story about Sisyphus, who was the king, and who was sent to Tartarus because he killed his guests in the castle.

The reason why he killed those people was because they disobeyed the rules of his castle and didn’t listen to the rules of hospitality.

Another king called Tantalus also ended up in the Tartarus because he killed his son Pelops.

The death of his son was so terrifying and cruel, that the gods decided to punish Tantal by throwing him in the Tartarus.

One story that was told by Plato mentions Rhadamanthus, Minos and Aecus who were the judges in Tartarus.

They decided the faiths of the ones who would come to Tartarus and each judge judged the separate race of people.

Tartarus ruled over this dark place where light never shined. This was the place where human souls would go to when people died and the judgment they faced down there was similar to the judgment that exists in other religions around the world.

Tartarus didn’t make the decisions about human faiths by himself, since there were judges in the Tartarus who did this instead of him. Souls that would come to Tartarus were judged according to their lives and things they did in their lives.

Tartarus in some versions was the place where all the sinners are sent to receive their last judgment. In Roman mythology, there are also mentioning’s of Tartarus in Roman culture. Tartarus is not called Tartarus in the Roman mythology, it is called the Aenid and it represents a big place that has a lot of flames and terrifying things around it that make it even scarier to think about it. Sinners that are sent to Tartarus can’t escape because there are large walls surrounding the entire place. No matter how much they try to escape the walls of Tartarus there are no way they can do that.

In the New Testament, there is a mentioning of the word tartaroo which is the short for the verb kata-tartaroo. This verb is translated as “being thrown in Tartarus”. This word alone is enough proof that the Greek mythology reaches long distances and that it appears in many different cultures and religions.

Tartarus as a deity is one of the scariest but also one of the most important deities in Greek mythology.

He represents a place where sinners go to get their last judgment and to receive the punishment for everything they have done. Tartarus is also mentioned as the father of some of the Greek most important deities. His role in the Greek mythology is not direct and he is often just mentioned in connection with the place he ruled over. T

his place was something like a hell that exists in other religions and cultures. Either way, his mentioning in stories and myths is something that evokes chills and fear in the bones of people.

Greek mythology represents a combination of different stories and myths that were created over the course of history. Sometimes these stories represent real events that took place in ancient Greece and countries surrounding it, but other times they are simply a product of human imagination.

Stories and myths were delivered from one generation to another which allowed the characters and deities to live and exist for a long period of time. Many works of art from different branches tell the stories about Greek deities and allow us to see the amount of respect the ancient Greeks had for their gods.

Tartarus is never mentioned in direct contact with other deities and gods. His character is mostly mentioned as a place where people’s souls go to after people die. Some stories mention that souls of the dead in general go to and other stories tell that only souls of sinners go to after death. They go down there to get their last judgment and receive their punishment.

Tartarus is definitely one of the most important Greek deities even though it is never mentioned in actual events and stories surrounding other Greek deities. His influence is evident even in popular culture where we can find mentioning’s of his name in various areas of human existence.

Tartarus remains to be the greatest fear and mystery for people, and a place where all of us will one day go if we spend our lives in sin.