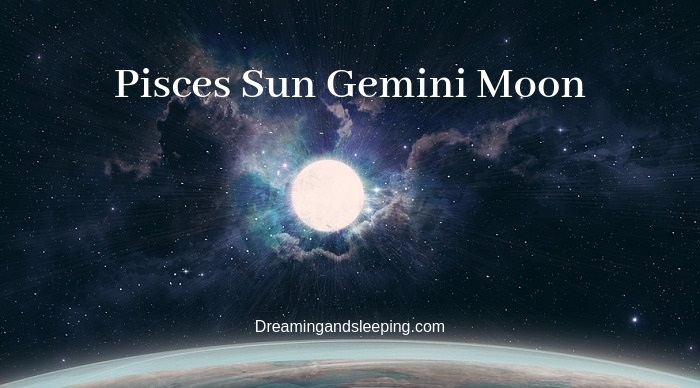 The aspect of the Sun is very important in the natal chart, and in this sense, we must speak of the solar method that astrologers use while working on someone’s natal chart. This is the method where a map is formed when the Sun has rotated to the same location it was in the natal chart.

Understanding this aspect in the natal chart provides an insight into the next twelve months of his life, for example.

So it all comes to the position of the Sun and the Moon that comes in the same package – today we will look into a life of the person who has Sun and Moon located in Pisces and Gemini signs.

This combination may sound weird at first, be we assure you that this is the person who may get the best out of both signs, just keep reading.

This is the person who is seen as cold, but in fact, this is the human being who is very practical, can communicate very clear, and always aware of the things that are going on around him.

On the one hand, he is the person who has strong feelings, as all Pisces do, which is instinctive and often obscure, he constantly works in the realm of the subconscious.

Thus, the transparency of ideas, thoughts and logic of the Moon located in the Gemini sign seems that it does not fit into the indefinite and passive nature of the Sun in the Pisces.

But, depending on the ability to find a balance in this union, there is also a situation in which the virtues and disadvantages of these two signs manage to fit perfectly, compensating in an often inflexible personality.

So in the end, this combination could give a person many qualities – he can be the one human who has a warm heart and strong mind, and who uses both of them to make things work or him in the best way possible.

This is the person who has Sun and Moon located in Pisces and Gemini sign, and he can be very happy if he feels the small successes and because it climbs upwards.

This is ok in some way, he knows how far he can reach – but the problem is that he truly does not know how to retain the position gained and may fall low.

The scenario in which this happens at the moment where he tries to anchor the dominance of the senses.

Some may see him as the person who is careless being and who do not show emotions, but the fact is that he has a lot of them, just sometimes his mind does not let him show them to the public.

At times this person gets the impression that he lacks self-confidence and looks like a person incapable of building himself in a solid personality, and in some cases this turn out to be the truth.

So, it cannot be said that this person lacks strength, but he can be too frustrated – there is certain complacency as an unconscious desire to separate from the world surrounding him.

He thinks that he likes to be alone, and sometimes this can be a good idea, but in fact, this human needs people, either to communicate or to be his support.

He can be the person who is often tormented by identity problems, who is fragile and subjected to influences and largely depends on the characteristics of his environment.

When a person has Sun located in the Pisces sign and the Moon in the Gemini sign, this means that he has the ability to be emotional and loving, but at the same time the ability to communicate openly.

He is one type of Pisces who has the ability to spontaneously establish contacts in his environment and find lovers who will be his great love. Not many Pisces have this ability, they are usually very close, but not this one, he can be the most communicative person that you have ever met. And he uses this strength to make people fall in love with him, and to stay with him for a long time,

He is intuitive, and has the imagination of advancement, extraordinary intelligence and a developed critical spirit – it is characterized by a constant need to understand, learn and determine something -this is the method that he uses to find lovers that will suit him.

Sometimes it happens that his feelings can be suppressed and makes him nervous and dependent on the world in which he is developing -this is also true for his lovers.

We also must add that at this moment comes the inevitable internal conflicts of intellect and emotion, where one wins one, the other; sometimes a heart, sometimes a mind.

He struggles in this way, and sometimes he chooses lovers with his heart and others with his mind, in both ways he can make a mistake.

We should say that the person who has luminaries located in the Pisces and Gemini combination has more faces that it seems, and he does not know how to love and let himself love others. Because of this, this person is prone to gross errors and often run out of tact, and not many people can deal with such a partner.

But the good sides of this human being in love is that he is one partner who is ready to discover, who is very curious, extrovert, and some would say that this human being is, in fact, the embodiment of indefinable and indiscriminate, but sometimes he can bring uncertainty and instability in a relationship.

He is the person who can be very attractive and who are delighted with everything and everyone in his environment, but the negative said of this is the fact that he is the one that can hardly concentrate on one thing (one lover, in this case, he can be a cheater), so he moves from one goal to another, arguing in uncertainty, but deep inside the Sun in the Pisces want as much safety as it can have.

Marriage and emotion can often be found far from the person who has Sun and Moon located in Pisces and Gemini sign have started looking for it, and he needs a person of different ideas and descent, but someone who is different.

Regardless of anything else, this is the person who possesses a clear critical spirit, feelings are often suppressed, making him very nervous, and he needs a coherent, orderly person in a partnership relationship. Who can that be? This could only be the person who is born in the Virgo Zodiac sign, the one and only Virgo can understand how a mind and heart can work together.

The combination of these two lovers possesses a pronounced potential for achieving and maintaining a harmonious love relationship that can be firmly based on good mutual communication.

There can be love, attention and order that are necessary for our candidate, but from the other side, these two can make every problem disappear if they just talk their way out of it.

These two love birds are often able to achieve a very relaxed and successful communication when they get to know each other and get into the first contact because when they meet, they both want to say a lot about themselves.

They can last really long, or they can be one of those couples who will never forget one another.

This is a person of a very clear mind, someone who connects things faster, but also someone who is essential to show himself, to be the best in his environment. A very important for this human being is education, and many of his friends are found in his school environment.

He cannot be economical but he truly likes to spend money and time on his friends, he is happy to spend on his family, home. However, personally, this human being is often accompanied by internal fears of need for security, a great friend, but an excellent leader in team-based inquiries.

We must admit, that besides so many amazing qualities in the life of the person who has Sun and Moon located in Pisces and Gemini signs, he cannot stand up to consistency or sole commitment, while at the same time his lack of quality makes him uncertain – his friends hate this about him, and this is the moment when they part ways, regardless of how long they were friends.

He is not the person who has solid attitudes and often he does not even know what he really wants, so for him, many things, despite his intellect can be a difficult puzzle.

So, for example, he cannot example that friends abandon him at a certain time of his life, and he should first look at himself.

To sum up, this story about the human being who has Sun and Moon located in Pisces and Gemini Zodiac sign represents the complicated structure of two double and completely different signs, both equally unexpressed, often infinitely talented, but insecure, a little confident in themselves and psychologically fragile.

We must say that this human being has flexible and varied moods; and the variability of them depends on his subsequent, often wiser thinking.

He has great energy, but he has to learn to concentrate so as not to waste energy by doing multiple things at the same time – to have more sense to shape ideas than to realize them.