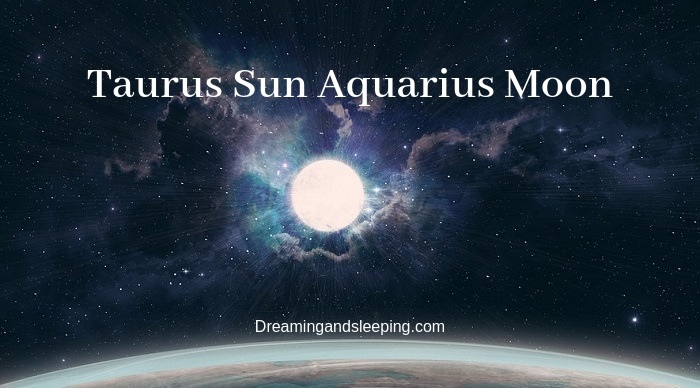 Astrology says that the aspect of the Moon in the personal horoscope always focuses on the emotions, good or bad, unexpected or expected, and understanding it, we can understand why we are doing the things we do in life, right up until everything becomes clear to us.

It is not a rare case to be questioned continuously why we said something, and we did not think that or why we did not respond at all.

The Moon is our subconscious and our inner voice which is the guiding star, and astrologers will always point out the fact that this voice should not be ignored, for without it there is no satisfaction.

The aspect of the Sun will let our imagination at will, support emotions, rejoice even, and it is the reason why we do certain things in life.

Today we are looking into one natal chart of the person who has Sun positioned in the Taurus sign, and the Moon located in the Aquarius sign.

In this person, there can be a certain amount of opposition, these two sides can be contrasted in a way, and at the beginning, we could say that this pssersonality, at the same time rigid and leisurely, sensual and spiritual, constantly oscillates between the need for stable and secure intimacy and the desire to open up, to mix with the multitude and diversity. This aspect is at the same time, a blessing and a curse (in the next chapter you will see why).

This human being is both the conservative teacher and a reformer, he is very closely related to the traditions, but it is irresistibly attracted to everything that is new -if he succeeds in balancing these two oppositions in life, he can become very successful in life.

In fact, this human being is very socially oriented, and his nature is endowed with one dimension of uncontested humanity, expresses the immense ability of understanding, reconciliation and deep connection with the world.

If all aspects are aligned, we can meet a person who has amazing and original ideas, who respects the tradition, who well plans the future.

Now, to get back to the conflict, this is the person who has opposition in his life – he is both connected to the tradition and the old, but at the same time, he sees himself as the reformer and the game changer. It often happens that his individualism falls into conflict with altruistic aspirations -this being does not accept the interference of others in his private life.

In this case, he has difficulty in mastering his self-defending reflex and quickly turns out to be brutal, or frustrated.

His conscious is susceptible to influences, and it can become distrustful, suspicious, and entangled in its own indecisiveness. Equally, the person who has Sun positioned in the Taurus sign and the Moon in the Aquarius is going to rebel against herself and lead a fierce inner struggle, in order to enable his to win her need for social independence or affective attachment, but according to the power that these two aspirations manifest.

Sometimes he can be under the influence of others, even if his mind will rebel against such an influence. He can even be contradictory in his actions and very concerned about his future and in a constant search for answers in the long period of life.

In this person, there is a conflict between theory and real events, which means that he will have a certain opinion of something, and do a completely opposite thing. Because of that, he cannot plan anything, but it is best expressed when he is spontaneous, witty, and relaxed.

In some way, for this person, love issues are mainly due to the loss of illusions in feelings. He cannot distinguish the reality from the imaginary world, and in his deep admiration of lover, he has an exaggerated expectation that is not materialised in reality.

Deeply inside, this is the person who has a special affinity for romanticism, but he does not always allow himself to preserve the lucidity needed for developing a sensual life and for success in the experience of common life. Though attractive and sensuous, he can easily happen to act utterly contrary to the ideas she represents.

For his lovers, it can come as a surprise that the person who has Sun in the Taurus and the Moon in Aquarius sign is actually emotional below what he shows. It may be very difficult for his lovers to discover this fact, and for him to show his true feelings – this person is capable of strong passions that no one even assumes even exist.

He has a great need for orientation and the environment in which he will express his emotions, for the people who are identifying to strengthen his personality.

This is one human being that needs to be in a relationship with the close-minded beings that understand him deeply – he needs to feel love, and for him to give up a little bit of his independence; he needs to know why he is doing so. Then everything will go well.

Here we encounter one lover that has some very advanced views on life and love, and he needs a strong, successful and capable personality for a partner. Someone with whom he will share inspiration in science, music, private work, but a person who does not like the authority and is like everyone he has to separate himself from something.

Although he will never, in his life, admit that he likes to be complimented, that he enjoys the attention and popularity, it gives him the inner strength to realise his sometimes somewhat unusual personal aspirations. So, who can be this amazing partner who will understand and accept all of these contradictions?

It could be a Leo lover – someone who will enjoy in giving that attention as well as he would want to receive it; but he will be the one who will be able to love the person who has Sun in the Taurus and the Moon in the Aquarius sign, like no other. This lover has a direct and open approach he openly loves and is ready for many interesting adventures in love.

The only conflict may arise in the situation where Leo lover behaves egocentrically and demands all attention to him. But his charm and loving person will make up all of his flaws; and when he is truly in love, he will put up with difficulty in relations that comes with the person who has Sun and Moon in Taurus/ Aquarius combination.

It is true that the inner contradictions that are found in the person who has Sun/Moon located in the combination Taurus and Aquarius are so great that they are truly difficult for life. This is also true for all of his interpersonal relations, including those with his friends.

His friends may find it strange because this person often changes his moods – as if you have the need for “duration in change”.

But this does not mean that he is a bad friend, but that he is acting in the way that his close friends (there are not many of them) must face the fact that he does not need anyone, and then anyone who does not like to be with him, may leave, and there is no problem.

However, this is not him beings against all others, but this person just enjoys being different, even pride with his individualism. He is very advanced in thinking and likes to be around the people who are the same.

He does not particularly tolerate interference, intrigue, gossip, because it simply disturbs him, and if his friends become like this, then he will walk away. When in a good mood he likes to do something new and is very youthful in his energy and actions that follow.

In the end, all of his friends must realise one thing – this is a strong individualist who loves working on his own.

Although he is a very persuasive speaker, he can often succumb to the influence of the environment that he does not like, so he sees himself completely outside the boundaries of his environment.

He attracts attention, has friends of different occupations, sometimes he does not manage in situations when he needs to react quickly, and he is not the friend that you will call to solve our problems.

In this Astrological combination, two different elements are combined one with the other, the Earth and the Air – they are oppositional, but with a certain balance these two can work well, and create a successful personality.

In this human being, we can see a somewhat static nature that is sometimes subject to the light stimulation (the impact of the Moon that is located in the Aquarius sign), and sometimes to the melancholic, slowed but the strong incentive of the Sun in the Taurus.

So, we end up, with one person that inside of himself, has a blend of a static, slightly melancholy persona, but sensual one – a person who wants to be individual, independent, but is often under a little pressure to find its place.

In the end, he is the one that is able to express himself in an unusual way, does not know how to deal in certain situations, but knows how to make the atmosphere where he can progress, although he often has a problem with confusion and a good merger of present and future goals.