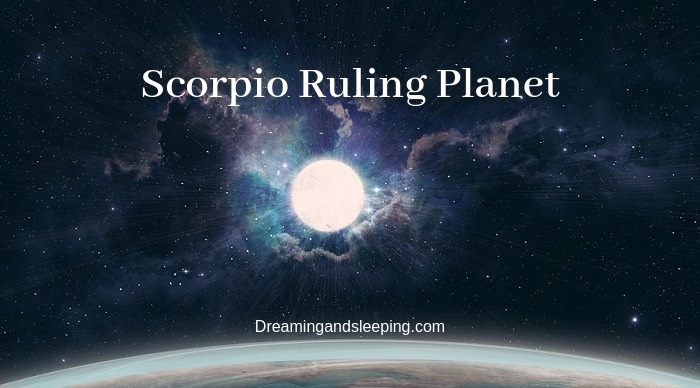 When you come to some well-known astrologer and when he looks at your natal chart, he will usually look first at the positions and aspects of the planets that rule your natal chart, and the most important among them is the ruler of your Zodiac sign.

This is the planet that speaks about everything you need to know about yourself, why are you in a way you are, why do you make certain choices in life, etc. It can be seen as the cause of many things related to you.

So, for example, if you are in the horoscope,  Aries or Scorpio Zodiac sign, you are “ruled” by two planets, Mars (planet of action, sexuality, sport, any activity, and even conflicts) and Pluto (power of regeneration, character strength, often aggression, ambition and sometimes darkness).

These two combined show a person character and all that comes with it – it depicts personality, and in this sense, many combinations are possible.

As we already speak of the Scorpio people, we will say that their ruling planet Pluto is the planet that is responsible for the complete energy on our planet Earth.

It is the planet that is pointed to the regeneration, it is related to all occult things, sexuality and every serious transformation we have in our lives -and it is in its most powerful state, in Scorpio Zodiac sign.

Scorpio people are those who are under the Pluto rule, and therefore they are very brave, intuitive, and analytical – all of their moves in life are very calculated, align to suit their personal needs and desires.

These people like to keep things under their control, and truly freak out when they feel like they are losing it; even more Scorpio people are those who are incredibly attractive, even if they are not conventionally beautiful.

They are, without a doubt, passionate, prudent and with determined will investigate until the truth comes to light – this can be their main focus in life, they hate lies, and truly believe that truth can set us free.

Maybe they will not express a lot and show emotions, but be sure that great things happen under the surface – Pluto, despite its distance and even coldness at times, hides a true fire inside, and they can truly be passionate people, not just in love, but in other matters.

Scorpios are excellent leaders who put themselves in that position because they are always aware of the situation, and it is particularly prominent in their ability to be resourceful. Not many things can surprise Scorpio people, and it is a great thing to have them close.

These people love to live life in a way that they experience and express emotions as much as they can, and it is not like they hide them because they are afraid, but more because it is all part of their game.

Although the feelings are very important for the scorpion, they show them differently than other watermarks, more often hidden in the chest.

In any case, you can be absolutely sure that the Scorpio people will keep your secrets, whatever they are, and it does not matter how dark they can be, Scorpios will understand you.

When we are talking about negative traits that can be seen in Scorpio Zodiac sign that is ruled by the planet Pluto and we must say at the beginning that this planet gives them a somewhat moody personality.

In interpersonal relations, Scorpio people are very jealous, stubborn and secretive – this means that they will defend their beliefs till the end, they can be jealous if others are better than they are, and whatever they do, it must be secretive, they are very private people who on the other side like to know as much as they can about other people.

Their mysterious behavior is sometimes difficult to figure out, which is why the environment can perceive Scorpio people as loners, and they can be just like that.

Although they can act indifferent, they notice everything, but rarely show what they truly feel – Scorpios adore imposing will because they feel that they are always right. Of course, they are not, but they will stubbornly say that they are, even if everything points to a different direction.

When someone provokes Scorpios, these people know to be very unpleasant and sarcastic, and never forget the insults, even worse they can be those who will insult others right back.

In worst cases, Scorpios can be cunning, arrogant, boastful, and prone to intrigues and vices, jealous, possessive, and vindictive.

In some cases, these traits are all combined more or less, and in other cases, there is just one of these flaws that are very prominent.

They are choosing lovers very carefully, and in this sense, the qualities required in each partner are intelligence and honesty above all others.

Much of the foreplay is happening outside the bedroom, in the form of conversation and observation -even if their passions want to throw them right at the scene, they will stop and observe as much as they can.

Once they fall in love, they are devoted and loyal to the end, they take every obligation in love with the biggest possible responsibility, there cannot be anything taken lightly.

The same approach Scorpios demand from their lovers, without any exception.

However, they are very cautious in the relationship, sometimes it takes a long time to pass in order to build trust and respect for the partner – but we assure you that it worth waiting for Scorpio to be your lover.

In this sense, they have a lot to offer as human beings, and when they fail after a relationship, they can pull themselves real fast. It is all about Pluto, and its power of rejuvenation.

In work and other issues in the lives of Scorpio people, they can be defined with the term desire and wanting. In this sense, Scorpio people are the symbol of leaders and true workers who can make everything seem amazing.

Even if their idea flop, they never suffer for long, they manage to rise from the ashes and to make things amazing again, with the new idea.

Scorpios are fantastic in managing things and people, solving problems and creating ideas – when these Pluto children set their goals, there is no stopping back, there is no pulling back.

These people will best solve the tasks that require a scientific and pervasive approach because it deepens into the matter, and if they dive deep into the matter believe us that Scorpios will become the best of the best in it.

Their ability to focus with determination makes them very capable managers, team leaders, and what sets them apart is their ability to separate emotions from work, they are not inclined to make business friendships, they prefer to do the job well.

In the end, we must add that having respect in all relations and in all things that are connected to their work is mandatory.  It must take directions in both ways (Scorpios toward people, and people toward Scorpios) and as a respected worker and as someone who respects others.

Pluto is a subconscious planet, the ruler of the underworld and the symbol of the death – but this does not mean that those who are ruled by the Pluto are dark people who are fascinated by death.

This can mean so many things, among them, we can say that Scorpios are fascinated with life, and can maturely deal with some hard issues.

This is their understanding of life, and in this sense, Scorpio people do not shy away from negative things and even pain in life, they feel like all of this makes them rich and better.

Pluto, and its subject, Scorpios, represent the sign of transformation and the identity that gives them the opportunity for the birth of things that are new and meaningful in the world.

This planet was discovered in 1930, and mythology says that it is the God of other worlds, the ruler of death. This is the male planet, it governs the underground world, and it has the energy that helps reveal mistakes and injustices. It restores good ideas, and this makes so much sense when we look at the life and work of Scorpio people.

Pluto gives Scorpio people, among everything else, these traits – they are enigmatic, foolish, indifferent, immoral and obscene at times, but they are always passionate.

In the end, Pluto is the planet that is responsible for changes, since it slowly moves -Scorpios can be seen as calm and with “cool” behavior, and you will recognize them by decisive appearance.

People often say that Scorpions are fierce, probably because they understand the rules of the universe well – or how our world functions in some way.

Scorpios are great leaders because they are very dedicated to what they do. It is in their nature to create a wide range of changes with their breakthrough ideas.